skip to main | skip to sidebar

The Future of Academic publishing

Lots of discussion is going on in the academic world about the organisation of the scholarly communication: digitisation, open science and funding play an important role.
A small piece of the discussion follows:
Last week on July 26, the results of the first half year of Elsevier, our biggest academic publisher were published:
Highlights Underlying revenue growth +4%; H1 reported total £3,653m/€4,164m

.....
Our Scientific, Technical & Medical (STM) primary research content, like that of most of our competitors, is sold largely on a paid subscription basis. There is continued debate in government, academic and library communities, which are the principal customers for our STM content, regarding to what extent such content should be funded instead through fees charged to authors or authors’ funders and/or made freely available in some form after a period following publication. Some of these methods, if widely adopted, could adversely affect our STM revenue from paid subscriptions. ( from p.14 2018 Interim press release RELX-Group).
So what could these methods be that could potential adversely affect Elsevier’s revenue?
Last year Francis Dodd had an opinion piece in the journal Learned Publishing : “The future of academic publishing: Revolution or evolution?”
One of his key points is the declining budgets of the publisher’s customers.
"Two key trends behind concerns over book and journal models are pressures on funding and the emergence of open access."
The two key trends he mentioned, funding and open access, are essential for the future of publishing, even Elsevier acknowledges that. The funding that is threatening the publishers is the lack of funding for the APC’s from the research funders, and the decreasing budgets for libraries to prolonged the ‘big deals’ of subscription journals. The discussion about funding and open access has been going on for some decades now, but “the academic publishing sector has proved remarkably  resilient”.
One of the problems with the money flow is the fact that some large academic societies, those that own high-ranking journals, receive a sizable amount of income by licensing their journals to major publishers. “As their activities have been largely dependent on publication income, most scholarly associations have a vested interest in maintaining the current subscription model. Moving away from the current model risks costing them their financial return.” (from “ Scholarly communications revisited : journal publishing, open access, and digital-age Journals” by Masahiro Okada, IDE Discussion Paper, 2018.).
Dodd notices : “A rising trend noted by many observers is the move towards greater collaboration between researchers, most obviously seen in scholarly collaboration networks (SCNs) such as Academia.edu, Mendeley and ResearchGate”. This also means a more positive attitude towards freely sharing of research results.  Although individual researchers tend to submit their paper to the established subscription –based journals because of the journal reputation, impactfactor, quality peer review and audience.
As Dodd concludes: “The market is caught in the paradox of researchers still wanting to submit articles to established journals but also wanting the right to share and access versions of their and colleagues’ work across the traditional boundaries set by subscription models.”

But what are the alternatives?

Alternatives can be in the scholarly collaboration networks (SCNs), the academic societies going back to their roots (see: ”Future challenges and opportunities in academic publishing, by Kyle Siler).  Or via the emerging trend of establishing ‘open research platforms’ (or open access platforms) as described in the LSE blog post on the European Open Access Platform.
LSE also gave space to Mattias Bjӧrnmalm who suggested a new business model for academic publishers: ‘Knowledge as a service’ opposing the traditional ‘Knowledge as a product’.
If the (pre-)20th century challenge was distribution of new findings, the grand challenge for the 21stcentury has become retrieval of important and relevant information from the ongoing deluge of knowledge generated. …
A first step could be to expand on what some journals already do today, such as providing commentaries, analysis, and summaries of current, relevant research. “ 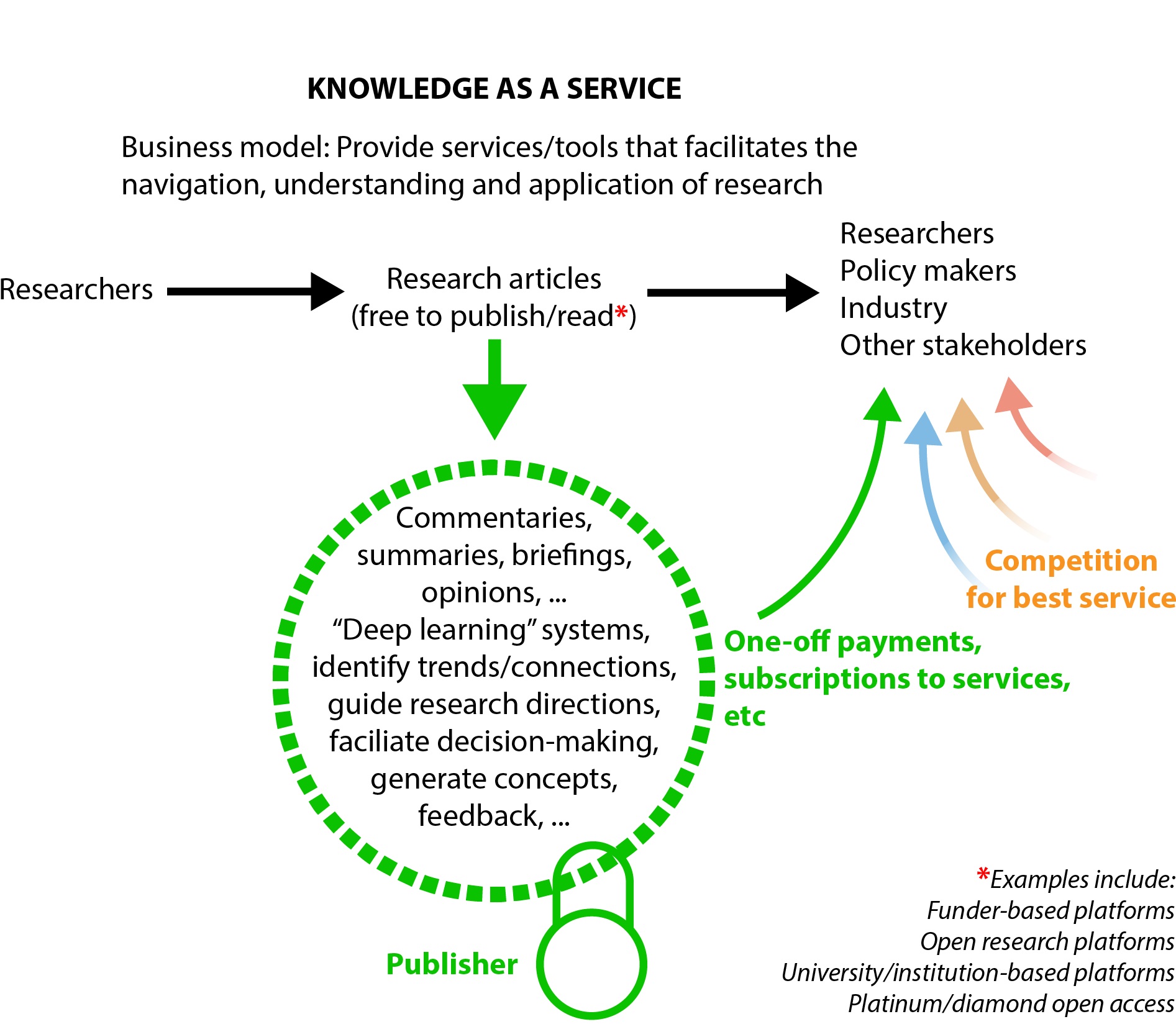 So there is enough to read:

Books in the NIOO Library